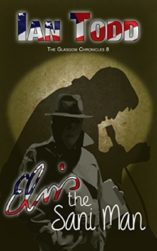 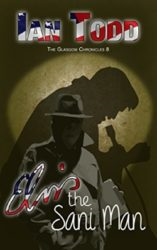 It is 1975 and Elvis Presley, head of Glasgow Corporation’s sanitation food inspectors for the north of the city, is busy preparing for the Scottish final of the ‘Elvis Is The Main Man Event’ at The Plaza Ballroom at Eglinton Toll.

When Elvis is not dreaming of stardom, he and his unlikely new partner, WPC Collette James, are hot on the trail of Black Pat McVeigh, the Mr Big of the city’s black meat trade, who is based up in Possilpark in the north of the city.

Pushing Elvis to do something about the plight of her constituents, who are being poisoned left, right and centre by one of the city’s most notorious ‘black butcher’ gangs, is Corporation Councillor for Springburn, Barbara Allan.

Unbeknown to the authorities, Barbara Allan is also the mysterious and elusive ‘Purple Dove,’ leader of a secretive underground group of women in the city, who call themselves ‘The Showgirls.’

Whilst struggling to bring the city’s diverse women’s groups together to stand as one, the campaign of taking direct action by The Showgirls continues to publicly ‘out’ senior male managers in businesses, hospitals and The Corporation who sexually harass female employees, by daubing graffiti and photographs of the guilty up on to the advertisement billboards that are scattered across the city.

Meanwhile, the close friends and supporters of Helen Taylor, having set up their own catering business for funerals and weddings, soon fall foul of Elvis The Sani Man and the law, when over a hundred guests fall ill after being served up Springburn’s Larder’s exotic menu.

Never far away from this mental mix, The Mankys, one of Glasgow’s young up-and-coming ‘organised’ gangs, continue on their merry way of mixing business and pleasure, whilst bank-rolling the campaign group that will hopefully lead to one of their members, Johnboy Taylor, having his wrongful conviction of shooting two police officers during a bank robbery in Maryhill back in November 1972 overturned.

Elvis – The Sani Man, is a dark, dangerous and often violent journey through the murky streets of Glasgow and is interspersed with black humour, whilst introducing the reader to Glasgow’s illicit underworld of back-street meat traders in the mid-nineteen-seventies.

Ian Todd once again reacquaints the reader with some familiar faces from previous Glasgow Chronicle books, whilst introducing a whole new batch of the craziest and wackiest characters that were ever launched out of the Rottenrow delivery room back in the day.