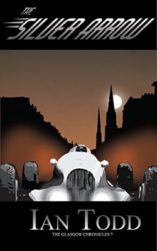 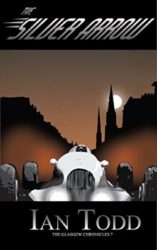 The Silver Arrow is Ian Todd’s 7th book and continues on from Dumfries in The Glasgow Chronicles series of books.
Whilst the residents of 1970s Glasgow are captivated by the antics of a mystery driver, who they’ve nicknamed The Silver Arrow, being pursued by police along Great Western Road in his 1930s sports car in the dead of night at weekends, a far more dangerous game of cat-and-mouse is being played out on the streets, below the radar of both the local police and Wan-bob Broon, Glasgow’s number one gangster.

After visiting Johnboy Taylor, Scotland’s longest-serving young offender, in Dumfries Young Offenders Institution, Nurse Senga Jackson heads back to Glasgow, unaware of the mortal danger that she and her flatmate, Lizzie Mathieson are in after Lizzie unwittingly overhears the deathbed confession of a dying gangster to Inspector Paddy ‘The Stalker’ McPhee, who has threatened to expose the sordid sex-life of the doctor on duty, in order to access the intensive care unit of Stobhill General Hospital in the middle of the night.
With half of The Mankys, Glasgow’s most up and coming young criminal gang, serving time in Dumfries, including their charismatic leader, Tony Gucci, responsibility for the safety of Senga Jackson and her flatmate is placed in the hands of nineteen-year-old Simon Epstein, a young entrepreneur from Springburn, who operates Carpet Capers Warehouse in the Cowcaddens district of the city.
Despite the odds being stacked against The Mankys and the two young nurses, Simon joins up with one of Glasgow’s top criminal legal teams in the battle to secure the evidence that could prove that Johnboy Taylor is innocent of shooting two police officers in a bank robbery in Maryhill. At the same time, Simon continues to duck and dive behind the neon lights of the dirty city, in a desperate attempt to keep the two girls alive.

The Silver Arrow is an often-violent thriller, though not without humour, with a high-speed plot that takes more twists, turns and risks than a speeding classic racing car in the night, consistently out-witting and out-manoeuvring its pursuers. The key question being debated amongst The Mankys incarcerated in Dumfries YOI is whether Simon Epstein can keep in pole-position until Tony Gucci can join him in the race against time, even though he doesn’t know who will strike when, where or at whom.