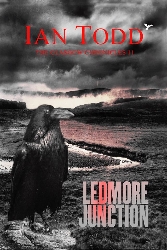 A young couple escape Glasgow to start a new life on a remote croft in beautiful North West Sutherland in the Scottish Highlands. One is a district nurse and the other a budding author, attempting to reinvent themselves amongst the stunning scenery of Achmelvich Beach and Vestey’s Bay.

In their wake, the police in the second city of the empire are still trying to come to terms with the carnage of gangland violence that suddenly spiralled out of control after two of Glasgow’s most notorious gangsters were assassinated eating breakfast in one of the city’s cafes.
Whilst the couple settle into their idyllic paradise, it’s not long before strange, unexplained events start to occur that leads Johnboy Taylor to suspect that they may be being targeted.
Everything seemed to be going to plan, until a strange bird of omen appears out of nowhere and takes up residence on their shed roof. Senga Jackson believes that it’s the same bird that has been following her around the remote district as she attends to her patients.

Whilst Johnboy suspects he has the answer to the bird’s sudden appearance, life at Little Vestey’s Croft starts to become complicated and relations strained, as the impending showdown between two unholy factions looms, threatening a love that has endured many turbulent trials and tribulations in the past.

Buy now on Amazon »
Scroll back to top
We use cookies to ensure that we give you the best experience on our website. If you continue to use this site we will assume that you are happy with it.I'm fine with this