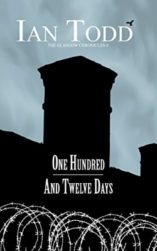 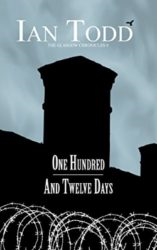 Two gangsters and three police officers appear in court and are placed on remand to Glasgow’s grim Barlinnie Prison for one hundred and twelve days. All have been charged with various crimes, including corruption and murder.

It isn’t long before well-known gangsters start to turn up dead, whilst others suddenly disappear into thin air.

Elsewhere in the city, off the radar, an off-duty police inspector has been charged with the suspicious death of his wife, in what the authorities believe is just another domestic dispute that took a tragic turn. But was it murder?

Meanwhile, a small group of senior police officers have been meeting to prevent developments spiralling out of control, whilst they try to figure out exactly what’s going on.

Across the city, those in the know, including The Mankys, are either running for cover or sitting waiting, deciding if the time is right to make a move.

Ian Todd’s latest novel, One Hundred And Twelve Days, is a gritty crime thriller, set in Glasgow in 1975 and follows on from his previous eight books in The Glasgow Chronicles series, in this violent, dark tale of power and corruption, on the streets of the mankiest city of the empire.