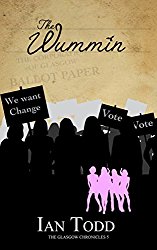 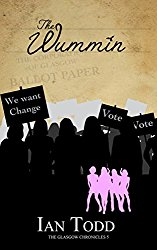 It is 1971 in Glasgow’s Springburn, and the stormy winds that are howling through the old tenement building closes and streets, leading up to the Christmas and New Year holidays, only adds to the misery that is swirling around the inhabitants of the north of the city.
On the 17th December, Issie McManus’s only son, Joe, is stabbed to death on the steps of The Princes Bingo Hall, on the same evening that her man, Tam, gets lifted by the police and shipped up to Barlinnie for an unpaid fine. As her life crumbles round about her, Issie turns to her neighbour and friend, Helen Taylor, who gathers together a group of local women, who are the scourge of The Corporation’s Sheriff Officers Warrant Sales squad, to take command of the situation.
Meanwhile, all the major newspapers are speculating as to whether Alison Crawford, the wife of a prison governor, will survive the shooting that killed her lover, Tam Simpson, the leader of the notorious Simpsons’ Gang from Possilpark, whilst daily headlining the gory details of her supposed colourful love life as a senior social worker in Possilpark.
Elsewhere in the district, Reverend Donald Flaw, who recently buried the sitting councillor, Dick Mulholland, is dismayed when he is informed that Councillor Mulholland’s election manager, the former disgraced Townhead councillor, JP Donnelly, has decided to throw his hat into the ring at the forthcoming by-election.
As the demonstrations against warrant sales in the area continue over Christmas, bringing Helen Taylor’s gang of motley women back on to the streets, The Reverend Flaw and his wife, Susan, believe they have found the ideal candidate to prevent JP Donnelly’s resurrected political ambitions from bearing fruit. The only problem lies in whether the chosen one can be persuaded to stand against him.
Still smarting from the headline in The Glasgow Echo, announcing that sales of The Laughing Policeman have topped 10,000 copies in Woolworth’s record department in Argyle Street, as a result of the weapon being used to kill Tam Simpson going missing, newly promoted Police Inspector Paddy ‘The Stalker’ McPhee, has been instructed to assist in the campaign to get JP Donnelly elected. Along with Father John, the local priest from St Teresa’s Chapel in Possilpark, an unholy alliance is formed that will go to any lengths to stop the opposition candidate from upsetting their political masters in George Square.
The Wummin is a fast-paced political thriller, set in the north side of Glasgow. It will grip the reader, tear at their emotional heartstrings, whilst at the same time, evoke tears of laughter and shouts at the injustice of it all. It follows this group of Springburn ‘wummin’ in their fight against social injustice and their crusade for change, whilst the odds are stacked against them by an Establishment that will do everything in its power to maintain the status quo.