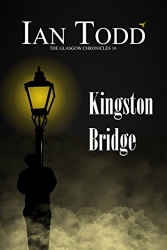 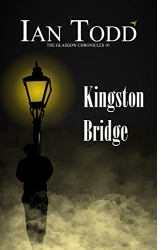 With only a month to go before two of the most controversial murder trials in living memory begin at Glasgow’s grim High Court, down in the Saltmarket, Wan-bob Broon continues to spin his dangerous spider’s web across the city from his cell in Barlinnie Prison, in an attempt to influence and control the verdicts.
The question on the lips of those in the know is whether Wan-bob Broon is the only shark that’s entered the murky waters amongst the shadows of the River Clyde, which snakes its way between the territories of two of Glasgow’s most feared organised gangs.
As chaos reigns within the city’s police force and revelations explode from the typewriter of Glasgow’s newest award-winning young journalist, Pearl Campbell, the race is on between the underworld, the police and the procurator fiscal’s service, to see who can control and influence her for their own ends.
Meanwhile, The Mankys, one of the up-and-coming wee criminal teams in the toon, are desperately searching to find a way of keeping their heads down and intact, whilst they plan a comeback on those responsible for wiping out two of their members. However, like everything else in the mankiest city of the empire, things don’t always work out the way they want them to.
If dodgy crackpot characters and the art of the double cross are up your street, then Ian Todd’s new street thriller, Kingston Bridge, is sure to whet your appetite and more.

Buy now on Amazon »
Scroll back to top
We use cookies to ensure that we give you the best experience on our website. If you continue to use this site we will assume that you are happy with it.I'm fine with this